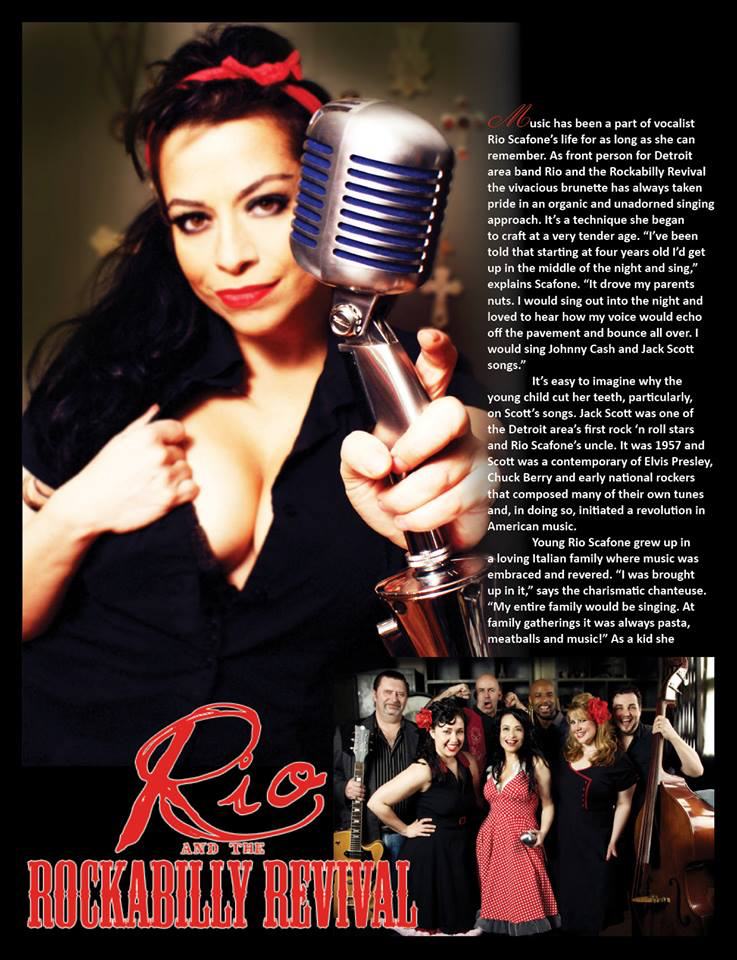 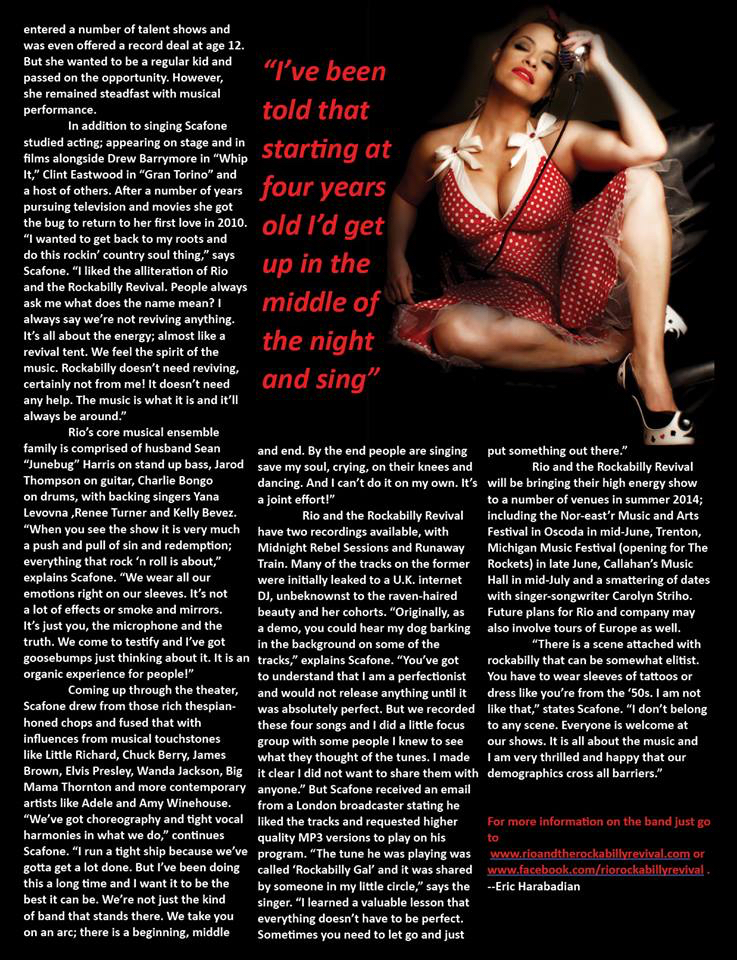 Music has been part of vocalist Rio Scafone’s life for as long as she can remember. As front person for Detroit area band Rio and the Rockabilly Revival the vivacious brunette has always taken pride in an organic at unadorned singing approach. It’s a technique she began to craft at a very tender age. “I’ve been told that starting at four years old I’d get up in the middle of the night and sing,” explains Scafone. “It drove my parents nuts. I would sing out into the night and love to hear how my voice would echo off the pavement and bounce all over. I would sing Johnny Cash and Jack Scott songs.”

It’s easy to imagine why the young child cut her teeth, particularly, on Scott’s songs. Jack Scott was one of the Detroit area’s first rock ‘n roll stars and Rio Scafone’s uncle. It was 1957 and Scott was a contemporary of Elvis Presley, Chuck Berry and early national rockers that compose many of their own tunes and, in doing so, initiated a revolution in American music.

Young Rio grew up in a loving Italian family where music was embraced and revered. “I was brought up in it,” says the charismatic chanteuse. “My entire family would be singing. At family gatherings it was always pasta, meatballs and music!” As a kid she entered a number of talent showers and was even offered a record deal at age 12. But she wanted to be a regular kid and passed on the opportunity. However, she remained steadfast with musical performance.

In addition to sending Scafone studied acting; appearing on stage and in films alongside Drew Barrymore in “Whip It,” Clint Eastwood in “Grand Torino” and a host of others. After a number of years pursuing television and movies she got the bug to return to her first love in 2010. “I wanted to get back to my roots and do this rockin’ country soul thing,” says Scafone. “I like the alliteration of Rio and the Rockabilly Revival. People always ask me what does the name mean? I always say we are not reviving anything. It’s all about the energy; almost like a revival tent. We feel the spirit of the music. Rockabilly doesn’t need reviving, certainly not from me! It doesn’t need any help. The music is what it is and it’ll always be around.”

Rio’s core musical ensemble family is comprised of husband Sean “Junebug” Harris on standup bass, [Jimmy Alter] on guitar, Charlie Bongo on drums, with backing singers Yana Levovna, Renee Turner and Kelly Bevez. “When you see the show it is very much a push and pull of sin and redemption; everything that rock ‘n roll is about,” explains Scafone. “We all wear our emotions right on our sleeves. It’s not a lot of effects or smoke and mirrors. It’s just you, the microphone and the truth. We come to testify and I’ve got goosebumps just thinking about it. It is an organic experience for people!”

Coming up through the theater, Scafone drew from those rich thespian-honed chops and infused that with influences from musical touchstones like Little Richard, Chuck Berry, James Brown, Elvis Presley, Wanda Jackson, Big Mama Thornton and more contemporary artists like Adele and Amy Winehouse. “We’ve got choreography and tight vocal harmonies in what we do,” continues skull phone. “I run a tight ship because we’ve gotta get a lot done. But I’ve been doing this a long time and I wanted to be the best it can be. We’re not just the kind of band the stands there. We take you on an arc; there is a beginning, middle and end. By the end people are singing “Save My Soul,” crying, on their knees and dancing. And I can’t do it on my own. It’s a joint effort!”

Rio and the Rockabilly Revival have two recordings available, with “The Midnight Rebel Sessions” and “Runaway Train.” Many of the tracks on the former were initially lead to a UK Internet DJ unbeknownst to the raven-haired beauty of her cohorts. “Originally, as a demo, you could hear my dog barking in the background on some of the tracks,” explains the phone. “You got to understand that I am a perfectionist and would not release anything until it was absolutely perfect. But we recorded these four songs and I did a little focus group with some people I knew to see what they thought of the tunes. I made it clear I did not want to share them with anyone.” But Scafone received an email from London broadcaster stating he liked the tracks are requested higher-quality MP3 versions to plan his program. “The tune he was playing was called ‘Rockabilly Gal’ and it was shared by someone in my little circle,” says the singer. “I learned a valuable lesson that everything doesn’t have to be perfect. Sometimes you just need to let go and just put something out there.”

Rio and the rockabilly revival will be bringing their high energy show to a number of venues in summer 2014; including the NorEast’r Music and Arts Festival in Oscoda in mid-June, Trenton Music Festival (opening for the Rockets) in late June, Callahans music hall in mid-July and a smattering of dates with singer-songwriter Carolyn Striho. Future plans for Rio and company may also involve tours of Europe as well.

“There is a scene attached with rockabilly that can be somewhat elitist. You have to wear sleeves of tattoos are dressed like you’re from the 50s. I am not like that,” states Scafone. “I don’t belong to any scene. Everyone is welcome at our shows. It is all about the music, and I am very thrilled and happy that our demographics cross all barriers.”