Rio and the Rockabilly Revival

One of the greatest shows I’ve ever seen in Michigan was introduced by none other than Reverend Jimmy Snow, a preacher from the 1950s who was famous for preaching against the evils of rock and roll. But that was then…

As the curtains rise and Rio and the Rockabilly Revival cut off the “good” reverend, we learn that THIS is now. 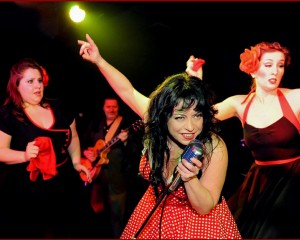 I looked around for a seat, but every seat and bare spot of floor was taken. I had seen this band one other time in a much smaller venue a few months back and found them intriguing, but front woman Rio Scafone’s sultry voice goes far beyond simple intrigue. It grabbed hold of the entire room. The passion, energy and intensity of this band can only be taken in and understood live. Miss Scafone and her band are instantly electric, mesmerizing and absolutely addictive. Literally, two songs into their set, I was trying to find out when their next show was. I can only assume that they guzzled down a case of energy drinks before taking the stage, because they played for two hours without a break and let me tell you, their energy is unmatchable. For those two hours, I could swear I was in Las Vegas. I couldn’t believe that I was watching a show of this level in a regular bar in Ferndale. Rio was so captivating that it didn’t matter if you were male or female, your eyes didn’t want to leave her for a second. I was completely locked in on her. Watching the band play felt like an honor, like we should be thanking them. I was convinced that I was witnessing a legend being born, seeing next generation icons.

People of Detroit, me when I say this is a MUST SEE SHOW. I’m talking to my Detroiters because once Rio and the Rockabilly Revival’s scent even waves near the right nose, they will be an instant sensation. When that happens, I promise you will all be kicking yourself. This is total insider information. It’s like telling you about Kid Rock or Eminem before they blew up. Knowing about Rio and the Rockabilly Revival now is a once in a lifetime opportunity to see one of the greatest bands not just Michigan, but in the world. 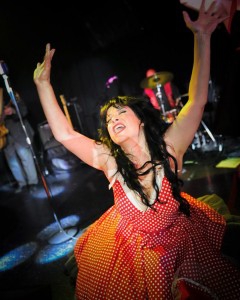 Five of the songs performed are originals written by Rio herself. It seems she has it in her blood considering her uncle is legendary Rockabilly singer Jack Scott, who was also the first white rock and roll star to come out of Detroit. You may also recognize this vivacious vixen, Rio, from somewhere else. Not only can she hypnotize your ears, but this talented beauty also has hit your tv sets more than once, most recently appearing on Detroit 187 (Public Defender Linda Stevens), Hallmark Movie, Smooch (played the over excited, slightly neurotic biology teacher), and the HBO Series Hung. Her talents are limitless. She is a triple-threat who has found her calling. Even though she could have a strong career in acting, her passion on stage is undeniable.

Rio Scafone was born to bring back Rockabilly.

Make sure to check this out this raw, sensual show and get the fever that ONLY Rio and the Rockabilly Revival can bring on. WARNING: they are not only reviving Rockabilly, they are making it a religion and seeing them will convert you, too!

Their new EP, ‘The Midnight Rebel Sessions,’ is out now. For more information please visit them on: http://www.reverbnation.com/rioandtherockabillyrevival