RIO AND THE ROCKABILLY REVIVAL WITH THE CAROLYN STRIHO BAND AT CALLAHAN’S IN AUBURN HILLS, MI ON 18-JULY-2014 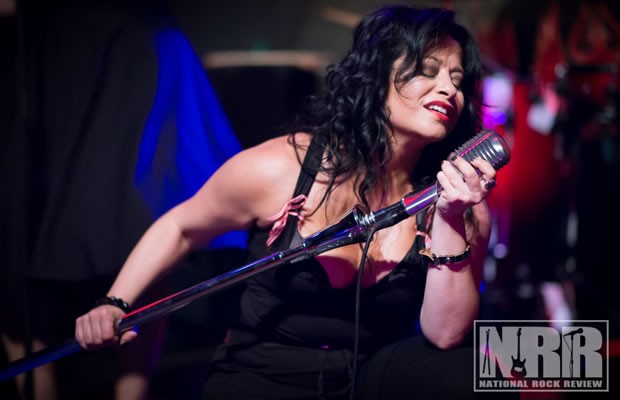 Callahan’s Music Hall was a full house for a return of the Rio/Striho Show.  Both acts have deep roots in the Detroit music scene, and have a fiercely loyal following.

This was the second time the two performers teamed up for a double bill at Callahan’s, and while they perform in very different styles, the two performances flowed together well, in an artistic, energy packed performance, both musically and visually.

Rio and the Rockabilly Revival took the stage with the famous recording of Reverend Snow condemning the evils of Rock and Roll music and the effect it has on young people. The theme of the performance is, as the name says, a ‘Rockabilly Revival’. Essentially a big tent revival, but with Rockabilly Music. The performance opens with Rio’s own Runaway Train and is followed by more original music combined with several rockabilly favorites, uniquely styled and made new again, by Rio’s deep roots in the history of Detroit  rock and soul. This show was the debut of Rio’s newly released single Testify and was received with cheers and excitement from their faithful following.

Rio is the genuine article in the world of rockabilly, as is her claim to rockabilly heritage. The niece of Rockabilly legend and pioneer Jack Scott, she is steeped in the traditions of the genre. However, Rio brings not only the music, but an entire performance. A veteran actress of both motion picture and television, she is a consummate entertainer to the core.  Precise vocal harmonies, in addition to meticulous choreography, are clear evidence of a rigorous attention to detail, and those who follow her social media feeds know her arduous rehearsal schedule.

Voted “Best Local Band – Original Music” by Hour Detroit Magazine, the music of Rio and the Rockabilly Revival, is unique within the genre of rockabilly as is its broad appeal. Young people in today’s rockabilly scene can be found in the audience, right next to folks that enjoyed the music when it was new. The show is both traditional and contemporary, authentic, but definitely not “old fashioned”. The brilliant usage of  traditional Southern Gospel times combined with roots rock and soul, produce an experience that is not to be missed.

Rio and the Rockabilly Revival